NERD ALERT:  The following is supremely nerdy.  If you have no time or patience for general nerdery, please ignore.

So for this SR game, I'm playing an Adept, someone who channels his magic through his own body to boost his abilities.  To make things more interesting, I'm stealing an idea from the awesome Unknown Armies, that of Irascimancy.  Instead of relying on spirits or formula or shamanic assistance, this guy runs on rage.  All of his special abilities are fueled by his anger, nothing from any outside source.  The catch is he can't actually display anger, unless he's using it to power up.  Rage is far too precious a resource for him to waste.

So most of the time, he's got a fake smile and comes across like a burned-out hippie.  Until he powers up.  Hence the "normal" and "attack" versions. 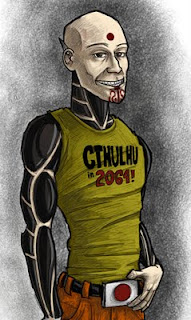 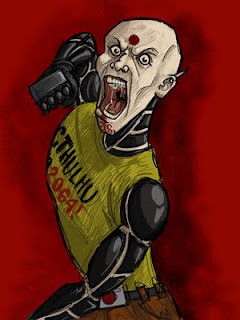 Posted by SleepyOni at 1:03 PM No comments: 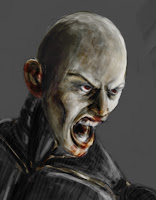 First pass at another Shadowrun character.  Looks way too lopsided & vampire-like.  But hey, that's what the first pass is for, right?  Also trying to keep things rougher, looser.  I'm hoping I can end up with a bona fide action shot, something that has some energy.
Posted by SleepyOni at 5:11 PM No comments: