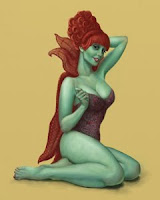 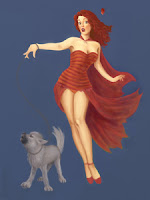 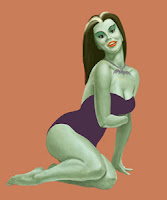 So here's 4 of a proposed 9 paintings...the ones that are closest to completion.  Super-small images here, simply because they're not done yet.   But I wanted some kind of evidence I could point to showing that I am, in fact, moving forward on these.   Sometimes I need to kick myself in the ass, y'know?

Posted by SleepyOni at 4:16 PM No comments:

Two early practice bits for the Monster Women project, that began with the Shuna Sassi study that I posted almost a year ago.  After working feverishly on it for a couple months, I became distracted by other shiny objects.  In the interim I've kind of re-thought the project a bit, and decided to focus on more of a classic pinup vibe - I want some Cheese with the Saucy.  This also gives me a perfectly valid excuse (not that I necessarily need one) to diligently pore over some Elvgren & co.

To that end, these two are out.  No longer fit the guidelines, like a bunch of other things I had started.
Posted by SleepyOni at 4:08 PM No comments: 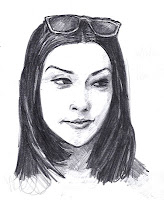 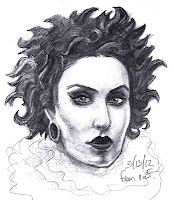 More sketchbook stuff.  I've been drawing in pencil lately, which is a bit surreal.  The last few years I've forgone pencil entirely, just gone straight to pen - construction lines be damned!  I definitely enjoy the chaos of just working in pen - when you screw up, you have to find a way to fix it that still incorporates your error.  On the other hand, to paraphrase Neal Stephenson, pencils are a really good technology.  More fun than I'd remembered.  Damn you, artistic ADD.  Damn you.
Posted by SleepyOni at 3:46 PM No comments: 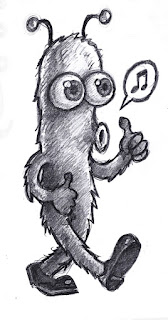 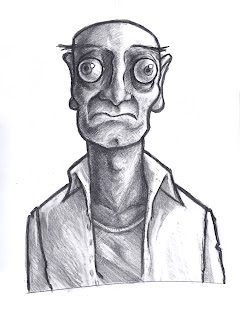 Positively silly sketchbook stuff.  And a brief Note to Self:
Relax.  Tomorrow's a whole new chance at awesome.
Posted by SleepyOni at 9:04 PM No comments: 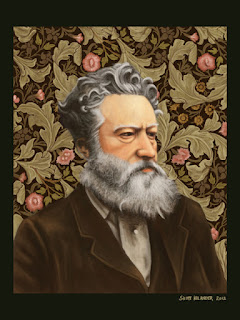 Birthday present for my sister.  William Morris portrait, combined from a photo of him as an older man with amazingly unkempt hair, color palette from a portrait of him as a much younger man, background a re-painted version of one of his wallpaper designs.  As always, my design/composition is fairly rubbish...but I'm fairly pleased with the colors.  And my technique seems to be improving, so that's good.
Posted by SleepyOni at 12:32 PM No comments: