So here's the output for 2014.  More than in previous years, certainly.  And more physical stuff made than in previous years as well.
4 pieces made for professional publication(!)...may seem pretty weak, but it's fairly huge for me.   Made a life-size R2 minus the dome.  Made a foam Mjolnir.  Also drywalled/painted my workshop AND built ~16ft of workbenches, and 8' of 6'-high workshop shelving.
Ran a kickstarter campaign that succeeded, allowing me to make some pretty nice prints for Monster Women Mag, as well as the 12-card packs for backers.  Feel really good about the color quality of these;  my confidence regarding CMYK conversion is vastly improved.  Produced a 12-page sampler from MWMag completely solo over the summer - around 60 spot illo's, plus period-style articles and adverts, and also a photoshoot that was then vintage-ized.  The KS was my first attempt doing anything with video editing and/or cut-rate fake animation.
The MWMag KS also let me produce 100 lil' 5-card packs for self-promotion, and MWMag postcards & stickers.  Attended  Pulpfest (meh) and GenCon (huzzah!) handing out said promo materials.  Got to pass stuff to Jordan Weisman(Shadowrun creator), Wil Wheaton(!), Dennis Detwiller(Delta Green creator and artist, nerd-hero), Steve Prescott(SR 3rd Ed artist, also nerd-hero), and a bunch more.

Had a rough year personally, but still better than 2013.  Had the advantage of lots of projects to dive into, without the initial shock of diving into the freelance life.
Overall. pretty okay starter year.  On to the next.

Posted by SleepyOni at 11:37 AM No comments:

Being the nerd that I am, I've always wanted to have an R2 of some variety.  Seeing as I now have a shop, and it needed a suitably ridiculous trashcan, the plan was set. 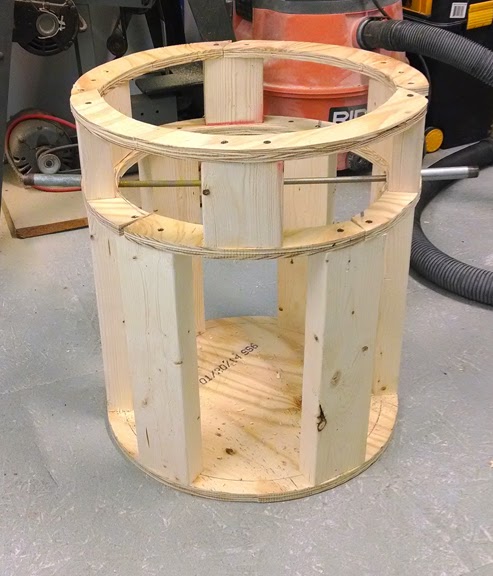 Started things with wood scraps left over from building my workbenches.  I had been collecting reference for r2 unit dimensions for a while; mine is pretty close to actual size.  Ended up being the correct diameter, but an inch'n a half too tall (or will be, once the dome is complete).  As always, I'm much more interested in something having the right vibe than being super-accurate.  Split the body into 2 sections just to make sure I had a lot of material built up to attach the legs to. 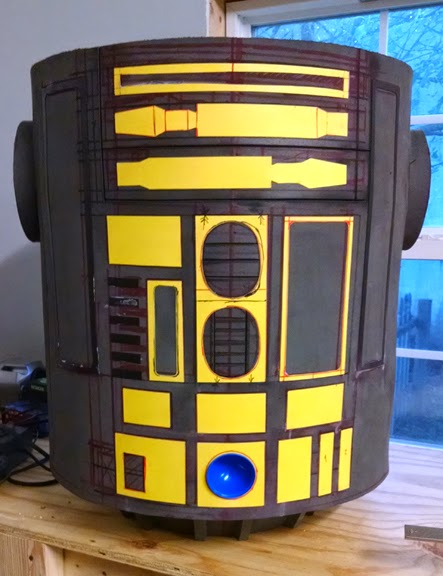 Loosely skinned the base with fairly thick plastic sheet to give the foam something to adhere to over the entire surface, then skinned the cylinder with foam. Drew out my reference marks & started super-glueing cut styrene sheet in the appropriate spots.  Used a couple different thicknesses; all from plastic signage bought at Lowe's(cheaper than buying sheet styrene).  Used a double-layer of foam on the leg connectors, wrapped around short sections of super-sturdy cardboard tube, which was then all glued in.  Cut the holes for leg connections, each is a short piece of plumbing pipe with a flange at either end.  Flanges to be screwed into the interior of the cylinder and into the inside of each leg.

Glued more scraps together for the legs, cut the top curve on the bandsaw, and proceeded to skin 'em in foam  Left 'em long, wasn't sure of the final length needed since I didn't know what angle the legs would be placed at.  More foam, more bits added. 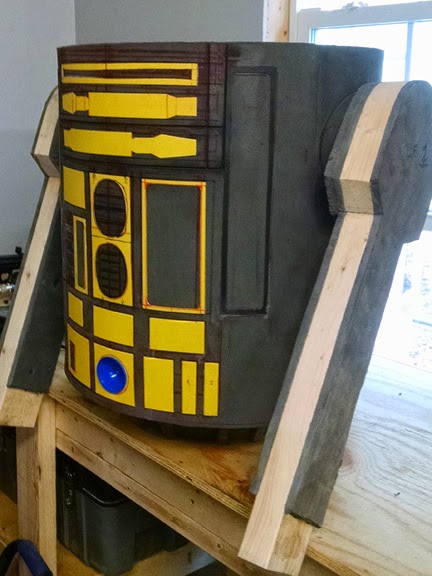 Above pic on the right: can see the yellow plastic I used to cover up the ridiculous gouges I put in the foam while attempting a different type of cylinder attachment.  Looked super-dodgy before paint, but evened out really well overall.  Also, in the bottom right of that shot you can see the base woodblock+pvc pipe structure that goes on the inside of each foot.  I chose to forgo the cables linking that part of the feet to the legs.  Coated all the foam in multiple layers of watered-down pva glue, with lots of fine sanding in-between coats, followed by a thorough layer of plasti-dip.  Also set the angle of the legs & permanently attached feet. 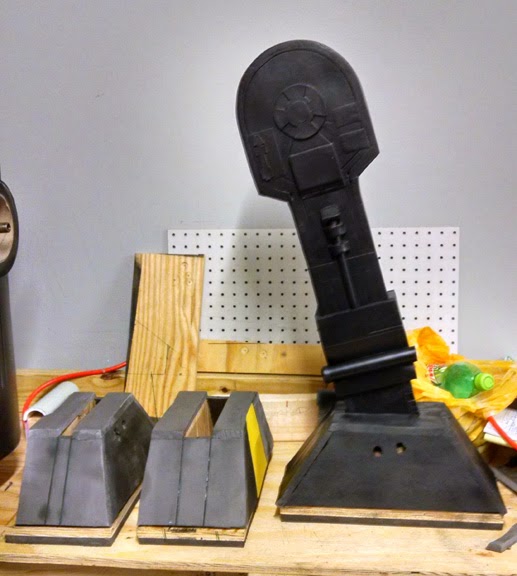 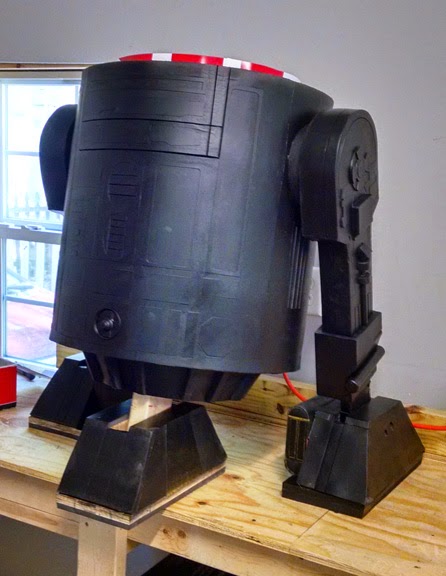 On to paint!  Covered the whole thing with 2 cans of a darkish red plastic-friendly spray paint.  Followed that with detail painting...other colors are silver and white, which created their own set of problems. 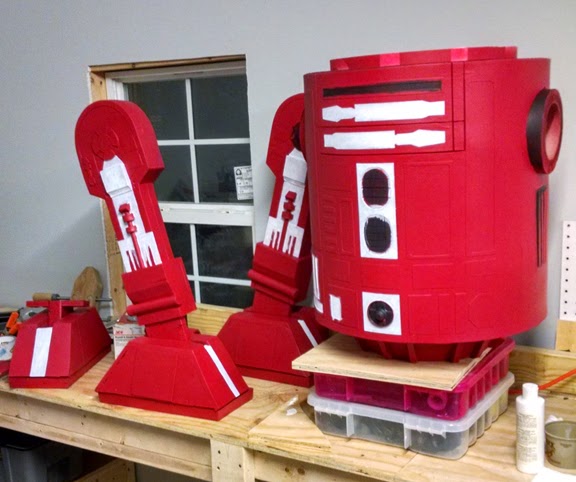 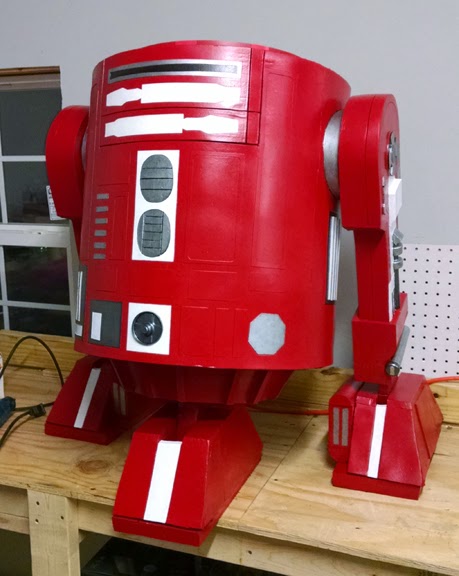 The other colors were all hand-painted...and they all needed multiple coats.  I think it was 5 coats for the white, followed by 2 layers of black undercoat for the metal bits, then FINALLY the metals.  Which also took several coats.  I was anxious to get the base colors done, because then I got to make a huge mess distressing it all.  Discovered that given the color scheme, my distressing options were a bit limited, had to stick to much darker hues overall.  But I did manage to get some battery-acid-style leaks in a couple spots, and the panel lines popped out better than I was expecting. 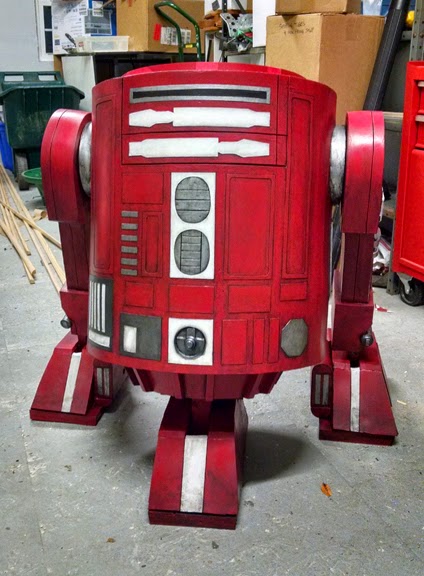 So there we go.  My 1st attempt at the dome was a complete failure, attempt #2 was much better but still a little wonky.  I may just go ahead and finish the dome as it is.  We'll see.  I don't think I'll really be able to do better and still make it out of foam (which was part of the point of this exercise; to push what I know how to do with this material).  Dome/lid mechanism will be part of the second installment.

Posted by SleepyOni at 10:07 PM No comments: